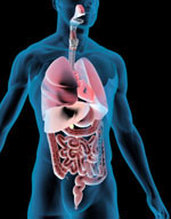 Lupus is an autoimmune disease that can affect almost any part
of the body, most often the joints, skin, kidneys, heart, lungs, blood, or
brain. Lupus can also affect the gastrointestinal (GI) system. The GI system is
your body’s pathway for taking in, processing, and disposing of everything you
eat and drink. Everything you swallow goes from your mouth to your esophagus in
your throat, on through your stomach to your intestines, and then to your
colon,  ending at your urinary tract or rectum. Muscle contractions control
swallowing  and bowel movement.


People with lupus may be affected by problems in any area of
the  GI system, including the surrounding organs such as the liver, the pancreas, the  bile ducts,
and the gallbladder. Not all of these problems will be directly  related to lupus disease activity;
some may be traced to side effects of  medication you take or other diseases that may be present.
Gastroenterologists  are the physicians who specialize in the GI system.

The esophagus is the muscle that joins your throat to your
stomach. When lupus causes inflammation in the esophagus, stomach acid can move
back up into your esophagus. Almost everyone experiences this backward flow of
acid, called reflux, from time to time, as either gas or the burning sensation
of heartburn. However, reflux that keeps occurring is known as gastroesophageal
reflux disease (GERD). The most common causes of GERD are hiatal hernia caused
by a weak sphincter (the muscle between your esophagus and your stomach), or by
weak muscle contractions in your esophagus. In addition to reflux, esopha-geal
problems may also cause you to have difficulty swallowing, a condition called
dysphagia.

Digestive problems are common in lupus. The symptoms you may
experience include nausea, vomiting, diarrhea, or constipation. Often these
symptoms are caused by drugs you take for lupus, such as non-steroidal
anti-inflammatory drugs (NSAIDs) and corti-costeroids. Sometimes, though, these
symptoms occur because your muscles are not properly moving waste through your
intestines. This group of symptoms is known as irritable bowel syndrome (IBS),
and may be caused by irregularities in your nervous system.

Ulcerative colitis (which causes ulcers in the lining of the
rectum and colon) and Crohn’s disease (which causes inflammation of the
digestive system) are two forms of inflammatory bowel disease that affect the
colon. Bloody diarrhea and abdominal pain are common symptoms in both, but
there  are differences that will help your doctor to distinguish between the
two.  People with lupus sometimes will develop ulcerative colitis, but only
rarely  will a person have both lupus and Crohn’s disease.

The peritoneum is a thin lining on the inside of your abdomen.
Inflammation of this lining can cause a condition called peritonitis. Most
cases  of peritonitis are due to an infection. However, inflammation caused by
lupus  can also cause a build-up of fluids in the abdominal cavity called
ascites  (pronounced uh-SAHY-teez). The symptoms you may experience can include
severe  abdominal pain, tenderness when your belly is touched, nausea and
vomiting,  fever, and/or lack of bowel movements. Ascites can also be caused by
infection,  pancreatitis, liver disease, cancer, or other conditions, so your
doctor may  want to examine a sample of the fluid to determine its cause and
begin the  proper treatment.

Inflammation of the pancreas (pancreatitis) can be caused by
lupus, but also can be caused by vasculitis (inflammation of the blood vessels)
or by certain medications you may be taking for lupus, including
corticosteroids, immunosuppressants, and diuretics. Because pancreatic
asculitis is treated with corticosteroids, while steroid-induced pancreatitis
is treated by withdrawing the steroid medication, it is very important that
your  pancreatitis is diagnosed accurately, and that you are treated and closely
monitored by a doctor with experience in this area.

Your liver is the largest organ inside your body. It is also
one  of the most important. The liver has many jobs, including changing food
into  energy and cleaning alcohol and poisons from the blood. Your liver also
makes  bile, a yellowish-green liquid that helps with digestion. When lupus
causes  inflammation in the liver, a condition called hepatic vasculitis can
occur. This  affects the blood vessels that supply the liver and can cause blood
clots in  those vessels. The liver may become enlarged due to ascites or
congestive heart  failure. People with lupus also may develop jaundice, a liver
condition that  gives a yellowish color to the skin. Jaundice in lupus also can
be a sign of  anemia or pancreatitis. If your liver enzyme levels are increased,
this may be  due to NSAIDs or acetaminophen, or may be a sign of lupus
activity.


Autoimmune hepatitis is a disease in which the immune system
attacks the liver, causing the liver to become inflamed. Autoimmune hepatitis
is classified as either type 1 or 2. Type 1 is the most common form in North
America. It occurs at any age and is more common among women than men. About
half of those with type 1 have other autoimmune disorders, such as type 1
diabetes, proliferative glomerulonephritis, systemic lupus, thyroiditis,
Graves'  disease, Sjögren's syndrome, autoimmune anemia, or ulcerative colitis.
Type 2  autoimmune hepatitis is less common, typically affecting girls ages 2 to
14,  although adults can also be affected.


Because severe viral hepatitis or hepatitis caused by a drug -- for example,
certain antibiotics -- have the same symptoms as autoimmune
hepatitis, tests may be needed for an exact diagnosis. Your doctor also should
review and rule out drugs you are taking before diagnosing autoimmune
hepatitis.  Both types of autoimmune hepatitis are treated with daily doses of a
corticosteroid (such as prednisone), but azathioprine (Imuran®) is also used.

If you take NSAIDs as a lupus treatment you are at increased
risk for damage to your stomach. This tissue damage could cause bleeding ulcers
to develop either in your stomach lining or in your duodenum (where your
stomach, bile duct, and pancreatic duct meet your small intestine). Ulcers also
can be caused by the Helicobacter pylori bacterium, which may be more common in
people with lupus due to their generally higher risk for infection. Medications
that help prevent ulcers from developing include Prevacid®, Prilosec®, and
Cytotec®, and medications that help to relieve the upset stomach associated
with  NSAID use include Zantac.


This information comes from the Lupus Foundation of America.